Skip to content
Press Enter / Return to begin your search.

Sometimes, you just need to get away.  Is that how it goes?  It’s true, though, and for someone who grew up on a farm and moved to the city, I think it’s especially true.  Isolation is kind of my normal.

Of course, I occasionally drop in conversation how I really need to get out of the city, maybe go camping, or just get lunch at a diner in a tiny town, but I never did until last week.  My best birthday gift (besides Mom paying for my brake job) was Erin driving me a couple hours away from the city to show me where the nature is.

Starved Rock State Parkis mostly notable for its pretty website and having a lot of facilities, including a gift shop, reception hall, and rental cabins.  There was an Indian battle there

many years ago, and one tribe opted to starve to death on a rock rather than surrender.  It’s right along the Illinois river, and you get some neat views of the Starved Rock Dam and Locks.  These things are interesting to farmers…

As you can see in the picture, there are a lot of cool things at Starved Rock, but there was a sense of being somewhere manmade.  There were stairs up and down all the hills, handrails along most trails, and even a boardwalk going through the woods.  The views of the river were mostly of what looked like a gravel plant on the opposite bank, the aforementioned dam, and a really long barge-and-tugboat contraption that I just had to assume was trash.  Because this paragraph is cynical.

I really liked nearby Matthiesen State Park.  There were a few steps, but once you descended them you were free to roam

through the bottoms of canyons, tiptoeing around the edges of pools of water and getting some actual mud on your shoes.

The few buildings that were there were aged and falling apart, and didn’t really offer much in  the way of services.  There certainly wasn’t a gift shop.  The trails above the canyons were kept nice, but in the bottoms of them, you really felt like you could explore.  We got to almost get lost out

there.  We saw turtles, caught frogs, explored, and got to be kids for a little while.  Which is what being in nature is about, isn’t it?

Discovering things is what’s really fun in life. At Starved Rock, I felt like I was just being shown things.  Like when my parents come visit and I take them to places I’ve found – they never think they’re as cool as I do.  Because it’s the finding that’s the best part.  At least for me.

So here are some more pictures. 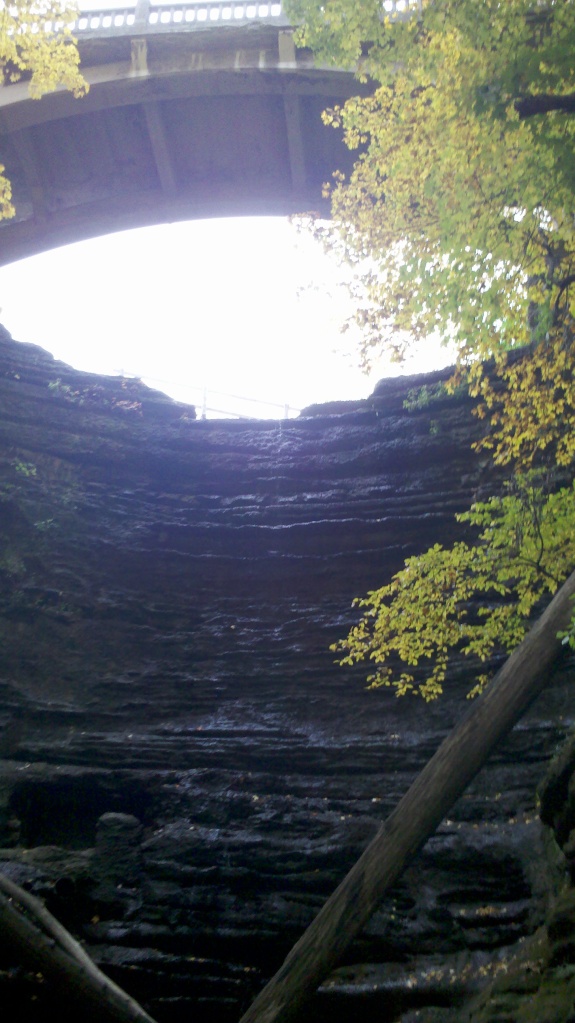 The host with the most, I produce Chicago's best variety show, the CostaCoast Cabaret, as well as doing all kinds of comedy (standup, improv, video) around town. Not to mention I love food; I own Oak Park's newest high-end butcher shop (Harrison Quality Meats) and am often in the back of the shop experimenting on new recipes. View all posts by Costa Lapaseotes